Why can’t we all just get along?

Somehow, through 230 years, our system of government has survived.  It hasn’t always been pretty.  Once we were so divided that we fought a Civil War to keep the country together.  Yet here we are, still using the same Constitution to govern ourselves.  Since the Civil War, it has mostly worked.

Have we reached another breaking point?  We are so polarized that we can’t solve any of the really big issues:  immigration, climate change, and inequality to name a few.  What’s changed?

Our elected leaders belong to parties, but they act as if they belong to warring tribes.  Partisanship vs. Tribalism is not just a matter of semantics.  It’s a matter of behavior, bad behavior that has no place in governing our nation.

Let’s look at the evolution depicted below.  Americans have always held a wide range of political views, ranging from conservative to moderate to progressive (some would use the label “liberal”).  That hasn’t changed.  What has changed is the way our political parties represent those views. 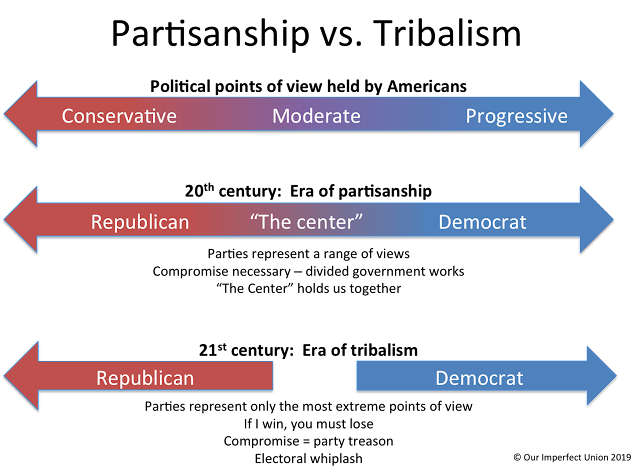 In the 20th century – and doesn’t that sound quaint? – we lived in what I’ll call the Era of Partisanship.  Republicans represented a range of views from very conservative to moderately conservative.  And Democrats represented very progressive to moderately progressive viewpoints.  And there was this magical place called “ The Center.”  The political maxim was that if The Center held, our system would work.

And it did work, because there were enough Republicans and Democrats who were moderate that compromise was possible.  Both sides had to give a little; neither party was completely satisfied, yet progress could be made.

Partisanship can be characterized as:

The 21st century Era of Tribalism is very different.  As tribes, political parties represent only the most extreme points of view.  Instead of negotiation and dialog, we get war.  Democrats are the sworn enemies of Republicans and vice-versa, not colleagues working towards the same goals.

Former congressional candidate Kevin Abel is fond of saying, “Most Americans play between the 30-yard lines.”  Our points of view are still largely moderate.  But with tribalism, those views are not represented in Congress.

Think this is an academic argument?  Think again.  Look at the table showing some of the landmark legislation over the last century.  This legislation was adopted in times of national crisis, when big changes were necessary.  In the 20th century, we see votes in which the parties came together over big compromises and passed legislation with very large, bipartisan majorities.  For the good of the country.

But look at the 21st century examples.  We see a lot less bipartisanship.  Votes are very divided along party lines. 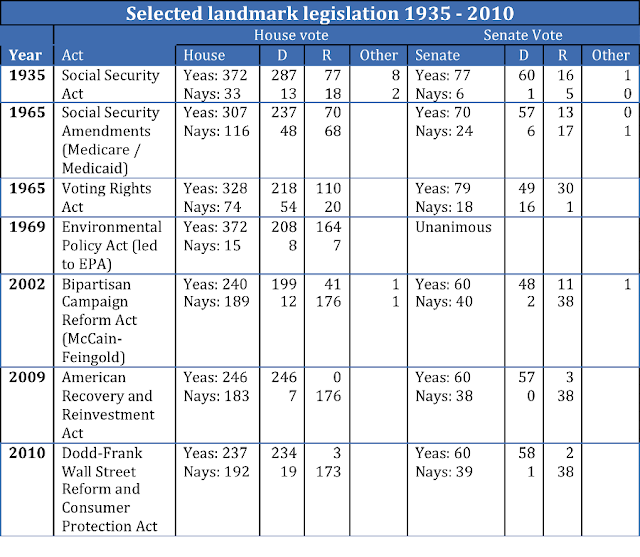 We need new landmark legislation to fix immigration, address climate change, and deal with income inequality, among other things.  Is it any wonder that we can’t make progress now?

So here’s our new political system in a nutshell.  Parties go all-out to win the presidency, House, and Senate.  If they succeed, they try to ram through their agenda as quickly as possible, because they know that the House or Senate might flip in 2 years.  Or their president might not get re-elected.  Some of the landmark legislation in the 20th century was passed when Democrats controlled both houses of Congress.  The 1969 EPA act was nearly unanimously passed by Congress and signed by Nixon.

We don’t know who will win the 2020 election, but I’ll bet that if any party takes control again, we will experience whiplash to either the left or the right.

We need new rules to rein in the Tribalists

Once in power, Tribalists break the rules to get what they want.  They set the rules of the House and Senate so that the party leadership controls the agenda.  They virtually eliminate the voice of the minority party.  Half, or more, of the population has no real representation in Congress.  Worse, they gerrymander the congressional and state legislative districts to stack the election in their favor.  Both parties are guilty here.  Democracy is broken.

I’m done hoping that electing different people will fix our system.  Tribalism is the new (ab)normal.  Until we can eliminate tribalist thinking among our politicians – don’t hold your breath – we need new rules for elections and government so that no matter whom we elect, they have to do their jobs while following the will of the people.

Our Imperfect Union’s agenda for change is about changing these rules.  It’s about changing how we elect them, how they operate while they’re in office, and how we can hold them accountable.  Our agenda addresses the executive, legislative, and judicial branches.  In future posts, we will address all of these transgressions against democracy.  There is a lot of work to do.  And some of it is heavy lifting, as in amending the Constitution.  You can always find our agenda for change on our About this blog page.

Don’t be a Tribalist!  Don’t vote for Tribalists!

If only it were that easy.

First, you can engage in civil discourse with your fellow citizens, even on social media.  No really, it is possible.  But be on the alert for certain tribal catch phrases:
If you’re at a loss for words in a tribalist discussion, try this soon-to-be-famous quote:  “If you only believe in democracy when your side wins, you don’t believe in democracy.”

Here are a couple of organizations that are working to promote civil discourse:

Second, you can also support bipartisan legislating.  No Labels.org believes that members of Congress can set aside their differences to find bipartisan solutions to big issues.  They support the Problem Solvers Caucus in the House.  The caucus successfully negotiated important rules changes in the 116th Congress (2019-20) for bills and amendments receiving strong bipartisan support.  Become a No Labels Ambassador and follow them on Facebook.

In the future, we’ll discuss the agenda for change in more detail.  In the meantime, check out our Get involved page.

What do you think?  Is tribalism the new normal?  Have any good examples to share?  Know of other ways to get involved?  Your comments are welcome, as long as they are not…tribal.