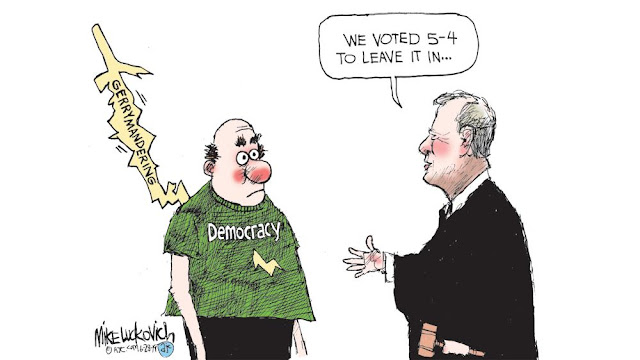 On June 27, the Supreme Court announced its decisions in 2 cases on unfair redistricting, one challenging a Democrat gerrymander in Maryland (Lamone et al. v. Benisek et al.) and one challenging a Republican gerrymander in North Carolina (Rucho v. Common Cause).   In both cases, by a 5-4 margin, the court overturned lower court rulings and thus allows the unfair districts to stand.

In future posts, we’ll delve into gerrymandering in more detail.  For now, here’s a quick synopsis.

What can these people be thinking?

Here’s a key paragraph from the 5-member majority’s decision:

“Excessive partisanship in districting leads to results that reasonably seem unjust. But the fact that such gerrymandering is ‘incompatible with democratic principles,’ Arizona State Legislature, 576 U. S. ...does not mean that the solution lies with the federal judiciary. We conclude that partisan gerrymandering claims present political questions beyond the reach of the federal courts.”

The court has long struggled with gerrymandering.  In the past, it has established only 2 real precedents:
But when it comes to partisan gerrymandering, there is nothing in the constitution or federal law that prescribes how districts should be drawn.  The U.S. Constitution leaves it to each state to draw its districts using any method they wish, with oversight possible via federal law.  But Congress has established very few standards under the law, and none for considering political parties when redistricting.  The only provision that still exists within federal law is that each congressional district must elect a single member of Congress.

And as we have seen, most states leave it to their state legislature to draw the districts.  In the North Carolina case, the legislature approved a map blatantly drawn by a consultant to favor Republicans 10-3.  The map worked; in 2016, Republicans won 10 seats, despite only winning 50% of the state’s congressional vote.  In fact, the political consultant admitted that he drew the map to maximize Republican control, bemoaning the fact that he couldn’t figure out a way to draw an 11-2 map.

In the Maryland case, the legislature approved a map favoring Democrats 7-1.  Sure enough, although the Democrats have not won more than 65% of the vote since 2012, they have always won 7 seats.  Amazing how that works.

So without any federal law or clear constitutional authority, the majority of the court threw up its hands.  They court basically said, “This is none of our business.”

It is of little comfort that the entire Supreme Court does not feel this way.  From the 4-member minority’s dissenting opinion:

“For the first time ever, this Court refuses to remedy a constitutional violation because it thinks the task beyond judicial capabilities.  And not just any constitutional violation.  The partisan gerrymanders in these cases deprived citizens of the most fundamental of their constitutional rights: the rights to participate equally in the political process, to join with others to advance political beliefs, and to choose their political representatives. In so doing, the partisan gerrymanders here debased and dishonored our democracy, turning upside-down the core American idea that all governmental power derives from the people.

Of all times to abandon the Court’s duty to declare the law, this was not the one. The practices challenged in these cases imperil our system of government. Part of the Court’s role in that system is to defend its foundations. None is more important than free and fair elections.”

What could the court have done?

This case calls to mind the landmark Brown v. Board of Education case from 1954.  In that case the court actually overruled a half-century-old precedent (Plessy v. Ferguson, 1896) that racially segregated public facilities were fair so long as they were equal.  As in this case, the court had neither clear constitutional guidance nor federal laws dictating standards for public facilities.  The court scoured in detail the writing of the 14th Amendment and federal laws for guidance but found little.

But the court decided to take a stand on right vs. wrong.  Without congressional authority, it ended lawful segregation in a 9-0 ruling, overturning one of its own precedents.  I recommend reading the short, simple opinion; it’s as clear a statement of peoples’ rights as you will find.

The Roberts court disappointed those of us who wanted a right vs. wrong ruling.  It leaves this imperfection in our union for now.

So now what do we do?

In a future post, Our Imperfect Union will dive deeper into gerrymandering.  For now, there’s a lot going on to fight gerrymandering.  This court will not have the last word.  Here’s what you should know and what you can do.

What do you think?

Is gerrymandering right or wrong?  What should be the criteria for determining state legislative and congressional district boundaries?  Who should get to draw the maps?  Are you an advocate for fair districts?  Share your story below.  Your comments are welcome, as long as they are…fair.