Can A Fair Debate Stop The Gun Madness?


Yes, we’re insane.  But we know how to cure ourselves.

Quiz Q1:  How many mass shootings (4 or more people killed or injured) have occurred in America in the last 10 days (July 26 – August 5)?  You are forgiven if you answered 3 (Gilroy, CA; El Paso, TX; and Dayton, OH).  The correct answer is 17.  The toll:  48 dead, 130 injured.  (https://www.gunviolencearchive.org/reports/mass-shooting)
This is madness.  It’s insanity.  It’s certainly not the domestic tranquility and general welfare promised by our Constitution.  Virtually everyone in America agrees that this is wrong.  Yet we have failed as a society and a country to systematically address this problem.
Many solutions are discussed, but none are in place nationwide:

As a national epidemic, gun violence is a disease that we refuse to cure, even though such cures are readily available.
Quiz Q2:  How do Americans answer the Essential Question balancing individual liberties against common good in the case of gun ownership?  We turn to Pew Research for the answer: 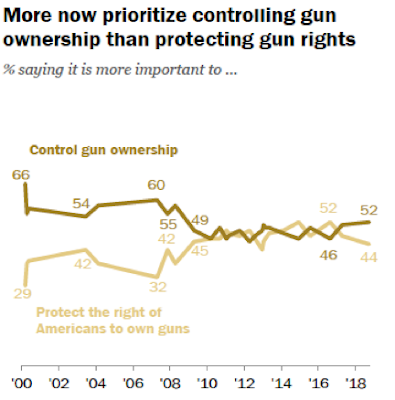 Quiz Q3:  Are there any solutions to gun violence favored by a majority of Americans?  More from Pew Research: 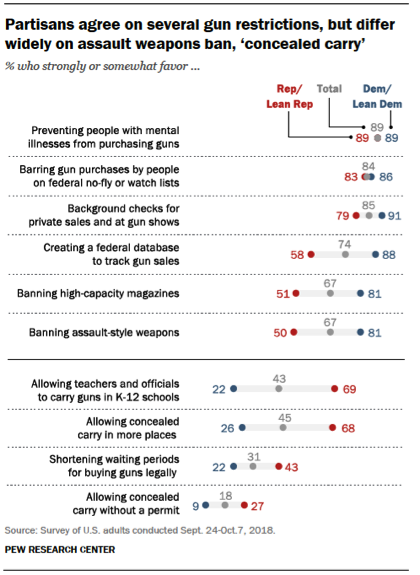 The top 6 solutions on this list are supported by 2/3 or more of Americans, and all are supported by a majority of both Republicans and Democrats.  These 6 are no-brainers.
Our Imperfect Union is not advocating for any particular solution.  However, we believe that our system of government should be able to hold a fair debate about the problem and arrive at a set of solutions that the majority of Americans support.  So what’s wrong?

Congress is gridlocked on guns

First, let’s recognize that although states have enacted their own rules on guns, they aren’t completely effective.  We are blessed with the freedom to travel from state to state, and to buy guns in one state and to (mostly) bring them to another.  This is a national problem, and Congress must address it.

Second, we must recognize our Constitution’s 2nd Amendment.  The issue isn’t so much the amendment as the widely differing opinions about what it means.  For 217 years, this amendment meant that individuals who were part of organized militias could own weapons.  The Supreme Court had reaffirmed that as recently as 1939 in United States v. Miller.  But in 2008, in District of Columbia v.  Heller, the Court held that militia membership wasn’t necessary.   Importantly, it also held that the right is not unlimited and thus subject to federal and state laws.

However, gun rights proponents such as the National Rifle Association believe that the 2nd Amendment declares an absolute right to bear arms, and any law that attempts to restrict that right must be defeated.

On the other side, organizations like Everytown for Gun Safety believe that the amendment leaves room for better background checks, removing weapons for domestic abusers, holding the gun industry accountable for damages, and so on.

If the debate is so clearly framed, why can’t Congress decide?  Three main reasons:

Let’s follow the money first.  According the Center for Responsive Politics, spending on gun rights is big business:

Spending for gun rights outweighs spending for gun control 8-to-1.  That shouldn’t be a surprise considering that retail gun sales are $11B annually, and that doesn’t include the manufacturers’ business, part of a $17B weapons industry.   That much money sloshing around Washington can buy a lot of influence.

Next, let’s see how the parties political ideologies have polarized.  The chart below is the breakdown of the first chart by party: 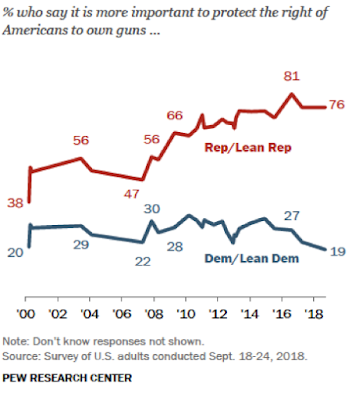 As we learned in Partisanship vs. Tribalism, there is effectively no representation for moderate points of view.  The overwhelming consensus on the 6 common-sense solutions is itself overwhelmed by party ideology.

This has played out predictably in Congress, as a brief history shows.

Does this look like a fair debate?  We don’t think so.  Let’s rephrase an earlier sentence:  As a national epidemic, gun violence is a disease that Congress refuses to cure, even though Americans have overwhelmingly decided what we want.

How do we get a fair debate?

Two big democratic reforms would do the trick.

The theory is that without money buying Congress, the debate should more about the merits and less about the cash.  And if votes must be taken, citizens can then hold elected leaders accountable for their votes at election time.  At some point, the overwhelming public consensus on solutions should find their way into law, perhaps after we’ve thrown the bums out once or twice.

In future posts we will delve more deeply into the pros and cons of these changes.  You can always find our roadmap for change on our About this blog page.

Of course you can choose sides on this issue, and there are plenty of organizations like the NRA and Everytown that would welcome your help.

But if you want to advocate for a fair and open debate today, call your Senator and demand a vote on H.R. 8 and H.R. 1112.  You don’t even have to express an opinion on the bills, pro or con.  You are simply demanding that Senators do their job.  Is that too much to ask?  Let’s see where our Senators really stand, and let’s hold them accountable at their next election.

To stop money from buying extremist views:  Support MoveToAmend.org and other groups proposing constitutional amendments such as HJR48 allowing the regulation of money as political speech.

To break the gridlock in Congress:  Ask your Senator to reform the Senates rules to eliminate the filibuster.  Ask your House reps and Senators to adopt a reciprocity rule that requires a vote by one house within 30 days of a bill that has passed the other.

Your comments are welcome, as long as you’re not just shooting off your mouth.