Is Impeachment a Fair Game?


Let’s be good sports, shall we?

Hello, sports fans!  Welcome to one of the rarest political spectacles you will ever witness, the possible impeachment of the President of the United States.  You have a ringside seat as long as you are anywhere near a television, radio, podcast, Facebook, Twitter, or newspaper (that’s so 20th century) for the next several months.  Most likely, the subject will be unavoidable if you are awake.  On the other hand, you could skip the whole thing by hibernating or emigrating to Antarctica.
Our Imperfect Union wasn’t planning on covering this event because…well…the event itself is a surprise.  It’s as if Washington has scheduled an extra World Series or Super Bowl.  Aren’t we lucky!  Nonetheless, we cannot resist the opportunity to observe and comment on this spectacle.  So we’ll take a break from our journey through our broken political system to observe our elected leaders at their best, or worst, depending on your point of view.
Tickets to this event will be hard to come by.  If there is a trial in the Senate, you might be able to obtain tickets to see it in person, like the examples here from 1868 and 1998.  These might turn out to be collector’s items, so contact your Senator now to reserve yours, just in case. 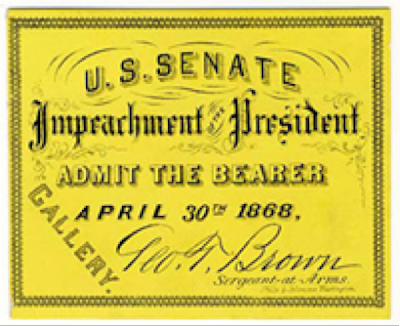 On the question of fairness, we must note that impeachment is an inherently political process.  It is a constitutionally prescribed remedy for a federal official thought to be committing “high crimes and misdemeanors”.  It is not a legal process because it operates outside of the judicial branch, but it is similar to a criminal proceeding.  Impeachment is mostly an act of Congress.  But as a political process, it does not have to be unfair.
Oh, wait.  We forgot we’re talking about the United States in the 21st century.  And as we saw in Partisanship vs. Tribalism, the parties involved are playing for keeps in an all-out battle for supremacy.  So can impeachment be a fair game?
For starters, the President and most of his Republican colleagues in the Congress are already dismissing the investigation as a witch-hunt and unconstitutional attempt by Democrats to cripple the president and undo the 2016 election.  Like Obi-wan Kenobi they prefer to wave their hand and say, “These aren’t the droids you are looking for.  Just go about your business.”
The Democrats, naturally, reply that Trump routinely ignores the law and the Constitution, has obstructed justice, and is abusing his power by asking “favors” of foreign leaders to dig up dirt on his political opponents.  They say it’s their solemn duty to investigate these matters and hold the President accountable.
Our Imperfect Union does not take sides with partisan arguments.  We are not wagering on the outcome.  We don’t claim any special ability to judge the President’s behavior.  However, our role is to determine whether all players in the game – President, House, Senate, and courts – are playing by the rules.  The act of impeachment isn’t necessarily unfair unless the game is rigged.

The rules of the game

The Constitution has a basic outline of the impeachment process but is short on details.
To understand how the game is played, let’s look at a brief history.
Were these impeachments fair?
Andrew Johnson’s case grew out of a long battle with Congress over Reconstruction.  It came to a head after more than 2 years.  Some historians claim that Senators were bribed to vote one way or another with promises of cash and patronage jobs.  However, in the end the votes to acquit came from both parties in a Senate that was heavily stacked against Johnson.  There was some fairness and some cheating.
Richard Nixon’s case unfolded after the infamous public hearings on Watergate and ongoing criminal investigation.  The House didn’t officially authorize an impeachment investigation until 9 months after the hearings, but the vote was 99% in favor.  The writing was clearly on the wall.  Congress asserted their independence and went to the mat with Nixon over their right to the tapes, winning a unanimous decision in the Supreme Court.  Senators met with Nixon and convinced him he had no chance.  The Nixon game appears to have been fairly even handed, with the usual partisan bickering but a just outcome.  We long for the days when bi-partisanship could accomplish big things for our country.
Many saw Bill Clinton’s case as a classic witch-hunt, with the original Whitewater investigation exonerating the Clintons (albeit many others were indicted for crimes).  Votes in Congress fell largely along party lines.  Tribal politics had begun around 1994 with Newt Gingrich’s rise to Speaker of the House.  The Clinton game was clearly more divided along partisan lines.

What did the fans think?

Impeachment in the modern era is a spectator sport, and another way to judge fairness is to ask if the outcomes fit the public’s view of these presidents.  For the Nixon and Clinton cases, we have strong evidence that the outcome matched public perception. 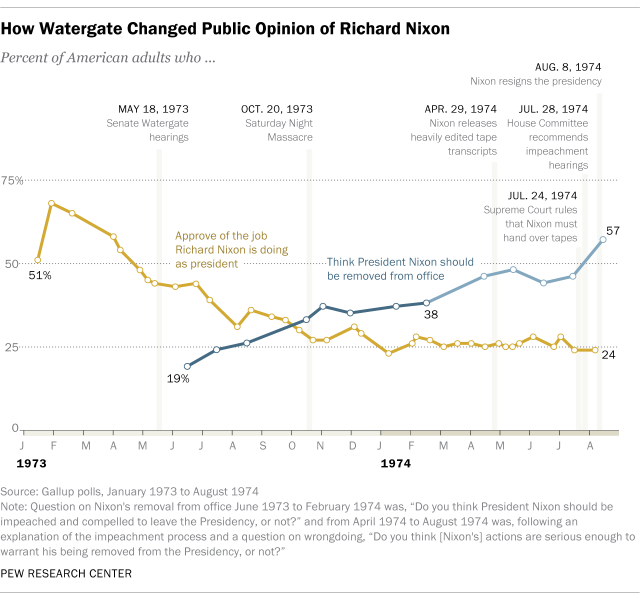 Nixon’s approval rating sank to around 25% during the impeachment period while the percent of people thinking he should be removed slowly grew to over 50%.  The fans thought he was a lousy president but didn’t strongly favor his removal until the end was near. 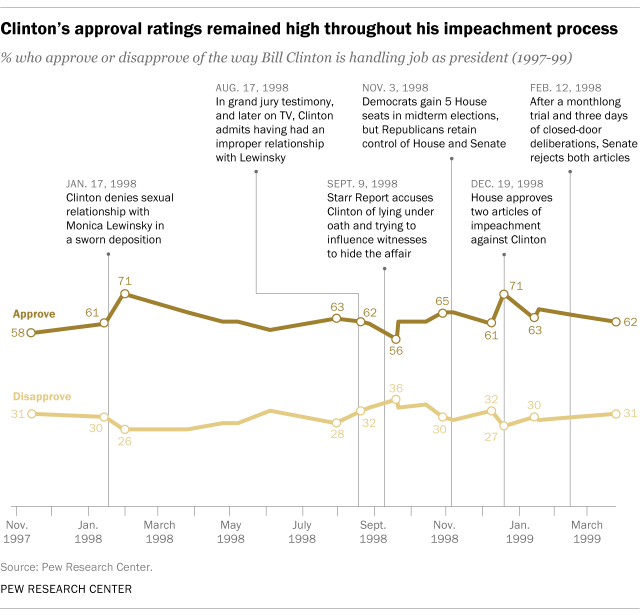 Clinton, on the other hand, had 60-70% approval ratings throughout the whole process.  And 30% or less supported his impeachment (details from Pew Research).
We could argue that Congress “got it right” for both Nixon and Clinton in terms of public perception.

It’s way too early to decide whether Congress is “getting it right” regarding Trump.  Most importantly, the process must adhere to the Constitution and be fair and balanced.
As of this writing, there is already considerable controversy over the process.  Must the full House vote to start an investigation?  Should the witnesses be seen in public?  Can the House enforce subpoenas to obtain documents and interview witnesses?  Will the executive branch cooperate?
While the politicians try to score their points, we will be keeping score as to the fairness of the process.  We offer this scorecard for those who want to play along.  We will be periodically updating this scorecard, so stay tuned to this blog.

Contact your Representative or Senator to express your opinion.  It seems clear that the inquiry is going to proceed, so don’t bother asking them to stop it.  But insist that the process be fair.

You can also contact the White House and insist that the President and executive branch cooperate.  Good luck with that.

Finally, you can jump into the social media frenzy about impeachment.  Be prepared to spend a lot of time.  We will be posting updates to the scorecard on this blog, via our Facebook page, and on Twitter (@OurImperfectUni).  Please comment on the scorecard!

Pew Research has good reporting and data tracking both the Nixon and Clinton cases.

Wikipedia has useful summaries of the investigations and/or impeachments: Johnson, Nixon, and Clinton