MLK's Dream in the 21st Century

We celebrate this week the 91st birthday of the Reverend Martin Luther King, Jr., one of the greatest champions of civil rights in the history of America.

We are also marking – but by no means celebrating – the 10th anniversary of Citizens United v. Federal Elections Commission, one of the worst Supreme Court decisions in history.  This decision has transformed our government from the democracy craved by Dr. King to donocracy.  Is that a real word?  It is now: 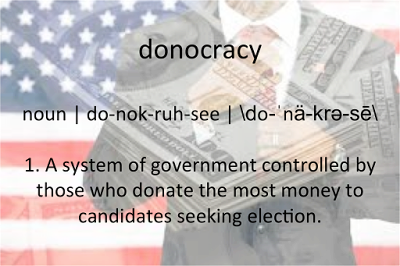 How are Dr. King’s dream and Citizens United connected?  They are on opposite sides in the battle for civil rights and perfecting our union.
Let’s start by understand Dr. King’s dream.  In his famous 1963 speech during the March on Washington, King explained his vision for civil rights and racial equality.  In the latter part of his speech, he eloquently explains:
Dr. King realized that to achieve this dream, people of all colors and from all walks of life must be able to participate freely in the political process.   He therefore championed the pivotal Voting Rights Act of 1965.  But on a broader level, people need equal access to the political process, not just to vote but also to have an equal voice as advocates for change, and to have equal access to the ballot as candidates for office.  Dr. King would be appalled to learn that the U.S. Supreme Court has issued 2 decisions this century, fifty years after his speech, that do material damage to his dream.

Unfortunately, the court has a history of anti-civil rights decisions.  Here’s a selective list along this arc of history:
With this track record, maybe we shouldn’t be appalled at the Supreme Court’s recent decisions.  Dred Scott led indirectly to the Civil War.  The Civil Rights Cases weakened the 13th and 14th Amendments and gutted the 1875 Civil Rights Act.  Plessy v. Ferguson weakened the 13th and 14th Amendments by allowing segregation in public facilities.  Decades of discrimination were justified by these terrible decisions.
How can the Supreme Court be on the wrong side of history so many times?  What don’t these people understand?
In their defense, the court is generally interpreting laws or constitutional amendments written by Congress.  The court is not supposed to create new policy from the bench.  So if an amendment or law is poorly written, it is subject to being struck down.  This is why the job of creating a more perfect union never ends.
The court does sometimes display a moral conscience.  Justice John Marshall Harlan, “The Great Dissenter” is notable for having dissented in both the Civil Rights Cases and Plessy v. Ferguson.  In the latter, he presciently noted:  “In my opinion, the judgment this day rendered will, in time, prove to be quite as pernicious as the decision made by this tribunal in the Dred Scott case.”
He was proven right 58 years later in Brown v. Board of Education.  In that case the court took a stand on right vs. wrong and decisively overruled Plessy.  I recommend reading the short, simple opinion; it’s as clear a statement of peoples’ rights as you will find.

Supreme Court v. The Dream in the 21st century

We turn our attention to the court’s 21st century “greatest misses”.
In Shelby County v. Holder, the court gutted the Voting Rights Act after almost 50 years.  Congress had passed the act by overwhelming majorities, setting aside partisan differences at a time when civil rights and racial tensions were top of mind.  And Congress updated the Act in 1970, 1975, 1982, 1992, and 2006.  Each update coincided with an impending expiration of some or all of the act's special provisions.  Most of those were passed during the era of partisanship, before tribalism took over Congress.  But that wasn’t good enough for the court.
In Citizens United, the court has unleashed a flood of political spending by incorporated entities of all types:  PACs, Super PACs, businesses, unions, and other associations.  In essence, the Citizens United ruling says that the free speech clause of the first amendment prohibits the government from restricting independent expenditures for political communications by incorporated entities.  Corporations are people.  The damage to the dream comes when these entities exercise their free speech rights and tilt the political playing field to their advantage.
How?  Because they have gobs of money.  Their influence over the political process dwarfs that of individuals.  Think this is just a theory?  In Can A Fair Debate Solve the Gun Madness, we show that money spent by organizations on this one issue alone is more than $335 million dollars, amounting to over $44,000 per member of Congress per year.  We, the People cannot compete with We, the Corporations.
Both of these anti-civil-rights decisions trample the political rights of people.  In Shelby, it’s the historically disadvantaged minorities.  In Citizens United, the court has elevated political rights of corporations over people.  We believe that Citizens United will be remembered as the Dred Scott decision of the 21st century.
America owes Dr. King an apology.  Better yet, we owe him a more perfect union, scrubbed of these fatal flaws.

With respect to voting rights, the House of Representatives has passed the Voting Rights Advancement Act of 2019 that would fix the formula struck down by the court.  It passed along party lines.  It arrived in the Senate just a month ago but is likely to get stuck there because the Marvelous Mr. McConnell has an ironclad grip on the agenda.  We desperately need to reform the rules of the Senate to allow more bills to get to the floor for debate and vote.

Overturning Citizens United is a tougher problem. We have had laws on the books regarding political spending dating back to the Federal Election Campaign Act of 1971, amended 1974 post-Watergate.  The most recent comprehensive law is the Bipartisan Campaign Reform Act of 2002 (aka McCain-Feingold).  But the Supreme Court has chipped away at these laws in a series of cases from 2007-2010 capped off by Citizens United.

The bad news:  because corporations have been granted first amendment rights, this will require a constitutional amendment.  The good news:  the House is trying.  There are seven different constitutional amendments pending today around this issue.  (See the appendix for a detailed comparison.)  The leading amendment, HJR 2, has 196 sponsors in the House and 46 in the Senate.  The next leading candidate has 65 sponsors in the House and is about to be introduced in the Senate.  Choose your favorite amendment, but let’s get moving!

You can get directly involved in restoring the dream!

The Reverend King urged us to act:
“This is no time to engage in the luxury of cooling off or to take the tranquilizing drug of gradualism. Now is the time to make real the promises of democracy.”

Join a nationwide movement advocating for a 28th Amendment


Let’s honor him by getting angry and getting involved!

The Center for Responsive Politics (www.OpenSecrets.org) has a wealth of information about which people and organizations are donating and spending political funds.

Wikipedia has useful summaries of many of the court cases cited above.