A New Pledge of Allegiance

In the past few weeks we have witnessed the conclusion of a rigged impeachment inquiry, a State of the Union address in which the President refused to shake hands with the Speaker of the House, and that same Speaker rip up the President’s speech on live television.  One would think that that’s enough childish games for one month; that things in Washington would return to “normal”.
But since these events, we have now witnessed:
Are the above actions legal and constitutional?  Yes.  Do they conform to norms of behavior expected of our Congress and President?  Not at all.
Let’s compare the views of our very first and our current president:

I had the honor of meeting with a co-founder of NoLabels.org and former Director of National Intelligence recently.  He concurred that this President is breaking all the norms of behavior, and it appears that Congress is standing idly by.
In their book, “How Democracies Die”, Harvard professors Steven Levitsky and Daniel Ziblatt track the history of many democracies including that of the United States.  They conclude that a combination of weakened institutions and failure to observe norms of behavior lead to the failures of democracies.
But I frequently hear this argument:  “We’re not a democracy.  We’re a republic.”  As if to say, “Get over it.  This is how it’s supposed to work.”  Nonsense.  In a future post, we’ll thoroughly debunk this misconstruction.  For now, suffice it to say that we’re a representative democracy or democratic republic.  Either term is accurate.  We democratically elect leaders to represent us.  And we expect those leaders to preserve, protect, and defend the Constitution, including the checks and balances.
It’s clear they aren’t.  The leaders we elect are engaged in tribal warfare.  A government built on the idea of partisanship with compromise has devolved to tribal warfare.
As a result, we are in a rolling constitutional crisis.  Our politistress is at an all-time high.

The New Pledge of Allegiance

We need to press the reset button.  We need to get back to basics.  We need to remind our elected leaders of their responsibility to uphold the Constitution.  In fact, they need a daily reminder.

So here’s a radical idea:  let’s rewrite the Pledge of Allegiance.  Instead of pledging allegiance to a symbol of our country, the flag, let’s pledge allegiance to the bedrock of the country itself, the U.S. Constitution. 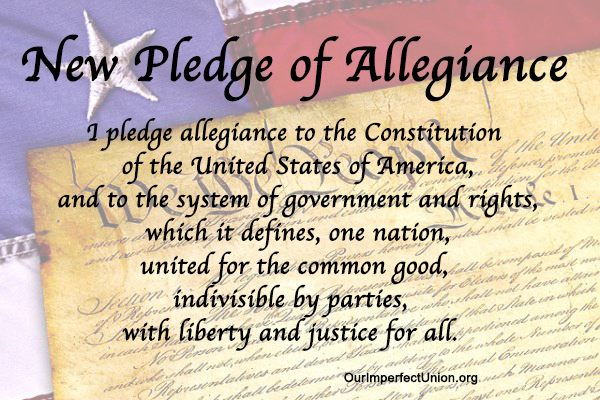 What can I do now?

I’m glad you asked.  Help this go viral.  Think of this as the coopera-virus (as in, let’s cooperate).

Here’s your to-do list:
This may seem silly.  Will it really make a difference?  I don’t know.  But we have to start somewhere.  It might as well be at the beginning.

“Never doubt that a small group of thoughtful, committed citizens can change the world; indeed, it’s the only thing that ever has.” -Margaret Mead

Think this is worthless?  A stupid idea?  You have a better one?  Comments are welcome.