Was The Super Bowl Fair?


You be the judge

The nation’s biggest sporting event of the year concluded last week, and the young quarterback for the Kansas City Chiefs pulled off an amazing…STOP!  That’s not the game we’re covering here.  The really Big Game, the Super Bowl of politics, with important national implications, was played in Washington.  We bet you know the score.  (Spoiler alert:  Trump was acquitted.)

But that’s not all we need to know.  Most of us care that in such an important event, the game wasn’t rigged.

We wouldn’t stand for a rigged Super Bowl.  After all, we see the whole game live, with replays.  And we get to judge the quality of the referees for ourselves.  But it’s not that easy with impeachment.
Back in October, we asked, “IsImpeachment a Fair Game?” Now that the whole affair is complete, we can answer the question with certainty. 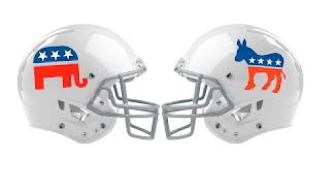 We are NOT asking whether the president should have been impeached.  We are NOT asking whether he should have been convicted.  This scorecard is strictly about whether the process adhered to the Constitution, the law, the will of the voters, and precedent established by the 19 prior impeachments in the nation’s history.
While Our Imperfect Union strives to be non-partisan, criticizing impeachment necessarily singles out certain individuals (e.g. Trump, Schiff, McConnell) due to their key roles.  And we will criticize votes that turned out to be along party lines, but that’s not why we’re angry.  We are critical of the outcome of the vote.  We weren’t involved in the votes.  We’re just the scorekeepers.
There have been hundreds of articles written covering every nuance of the impeachment, dating back to September 2019 when Congress received the whistleblower complaint.  We are going to skip the small skirmishes and get to the point.

Here is the box score for each branch of government as we see it. 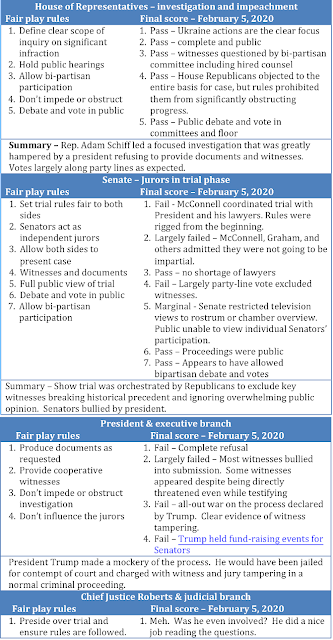 So what did we learn after all that?

We won’t comment on the facts of the case or the bulk of the President’s refutation.  You be the judge.

Based purely on the process, we have little criticism of the House’s investigation phase.  One could debate whether they should have investigated longer or tried to enforce subpoenas in court.  We won’t get dragged into a debate over the quality of their case.  Their process was fair.

The Senate is another matter.  They held a trial rigged from the beginning to acquit the President.  Majority leader McConnell orchestrated every move to suit the President and freely admitted it.  Senators who voted against calling witnesses violated 2 sworn oaths:  to sit as impartial jurors and to uphold the Constitution.  They also ignored the will of the voters, 75% of whom thought that witnesses should have been called.  Every impeachment trial in history has had witnesses, including on occasion witnesses not called by the House.

We won’t comment on their votes as to guilt or innocence.  We can say with confidence that the Senate failed to hold a fair trial.

And Mr. Chief Justice – What exactly was your role again?  Aren’t you from the judiciary, where witnesses are like, a fact of everyday life?

Finally, the President and his lawyers made a mockery of the entire process.  Look, we get the fact that lawyers are paid to advocate for their client and cook up creative arguments.  Head football coaches are paid to argue with referees.  However, his lawyers tried to establish a huge, dangerous constitutional precedent: the dubious theory that, if the President thinks his re-election is in the public interest, then anything he does is non-impeachable.  Our Imperfect Union cannot let this go by.

Nor can we let the President’s overall attitude and tactics go by, including:

Cry.  We all deserve a good cry.  After all, our politistress is at an all-time high.

Contact your Representative or Senator to express your opinion.  We recommend yelling into their answering machines.  Blow off some steam.  And let them know about your plans for November.

Vote!  We have the final say.

For lighter entertainment, you could watch all the Super Bowl commercials again.  Here is a fun review of them.

On a more serious note, our next post will propose an action that everyone can take.  Stay tuned.

Comments are welcome, but we don’t have an answering machine, so avoid the CAPS LOCK key.